A NBC television crew sets up outside of the RCA Pavilion at the New York City World’s Fair, 1939.

Last Tuesday, a bunch of people went to Flushing Meadows–Corona Park, the site of the 1964 World’s Fair to tour the Phillip Johnson–designed New York State Pavilion. The Pavilion was open to the public to commemorate the 50th anniversary of the opening of the 1964 World’s Fair. As with any free event in New York City, there was an hours-long line, and two people I know that went didn’t even get inside despite waiting over four hours.

Although it is still standing, the New York State Pavilion is in dire need of attention. Restoring or repairing it could cost as much as $75 million, and demolishing it would still cost around $14 million. These huge sums however have not deterred many groups from trying to restore the structure, a rare example of Googie architecture in New York City.

Some of the efforts to preserve the Pavilion include:

The World of Tomorrow… Tomorrow

Flashing back even further, Flushing Meadows–Corona Park was also home to the 1939’s World Fair, and on April 30, 1939, seventy-five years ago today, the 1939 World’s Fair opened to the public. This date, by the way, was also the 150th anniversary of the inauguration of George Washington. 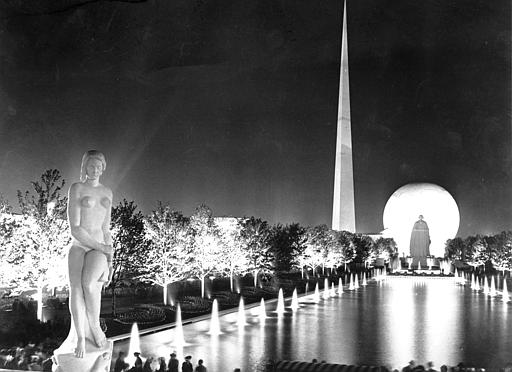 A statue representing the Freedom of the Press stands opposite a statue of George Washington, inaugurated 150 years earlier as the first president of the United States. (AP Photo.)

Speaking of presidents, President Franklin D. Roosevelt opened the Fair, the first such exposition in his home state. 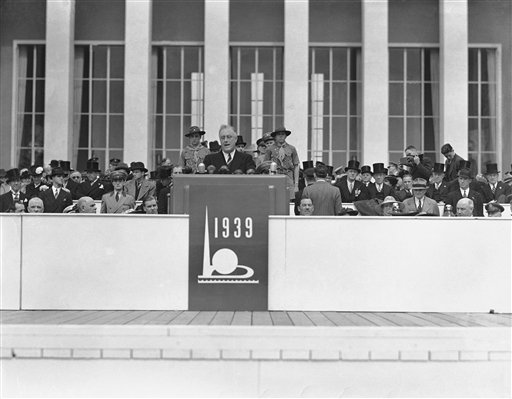 The theme of the 1939 World’s Fair was the “World of Tomorrow.” Many of the corporate exhibits, such as General Motor’s Futurama, anticipated the role that consumerism would play in revolutionizing culture. The highways that would reshape the American landscape a decade later, for example, were on display as models at the Futurama exhibit. 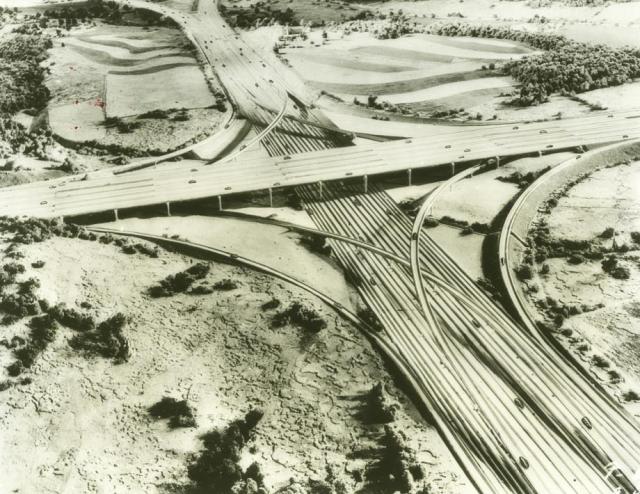 Now We Add Sight to Sound

To media scholars, the 1939’s World Fair is synonymous with the introduction of television. Although they didn’t invent it, RCA introduced television to the American public and, in very simple terms, explained its purpose. 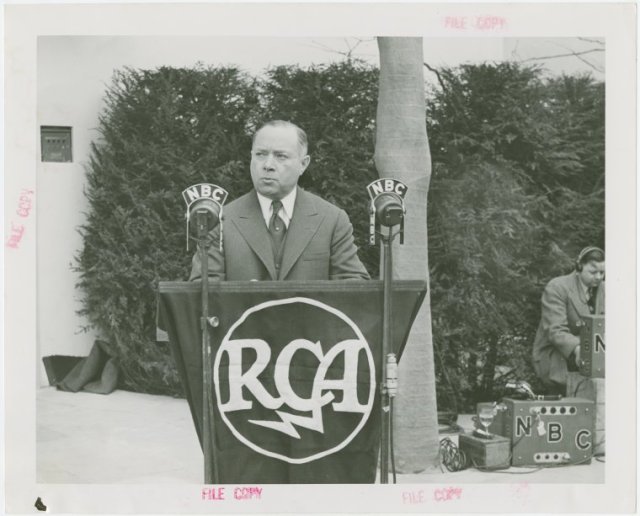 David Sarnoff, the president of RCA, clearly defined how television would work:

Now we add sight to sound.

Regardless of what television could do, RCA’s presentation of television introduced it with a clear purpose. RCA would guide television as an extension of radio. It would offer similar programming to what Americans heard on the radio in the 1930s, but with the addition of pictures. In the next decade, television would in effect supplant radio as the dominant entertainment medium, but it would still offer mostly entertainment programming sponsored by advertisers.

Or, you know, radio with pictures.

A few years ago, the New York Public Library curated an online exhibit of the 1939 World’s Fair, complete with an accompanying iPad app. It’s an informative way to lose a few hours.

While I am not quite so old to have been among the first users of BASIC, it was something I used as a child in the 1980s. It was the built-in programming language for my first computer, a Radio Shack TRS–80, and for my first Apple computer, an Apple IIc+.

In the second half of the 1970s, BASIC became the standard language for home users and hobbyist programmers. There wasn’t much packaged software, so people expected to write some of their own. Computer magazines published program listings for people to type in, then save to cassette tape.

To this day, BASIC remains the only programming language I ever learned, and it still frames my understanding of all computers and digital technology.

Garbage in. Garbage out.

Tim Berners-Lee, inventor of the World Wide Web, calls for bill of rights for the web:

Berners-Lee has been an outspoken critic of the American and British spy agencies’ surveillance of citizens following the revelations by National Security Agency whistleblower Edward Snowden. In the light of what has emerged, he said, people were looking for an overhaul of how the security services were managed.

At the twenty-fifth anniversary of the World Wide Web, it’s going to be hard not to look back and regard Edward Snowden as instrumental a figure as Tim Berners-Lee, Vincent Cerf, and Robert Metcalfe.

(Via a student who pointed me in this direction through a Huffington Post article, which calls it a “Bill of Rights.” The original article from The Guardian (UK) refers to it as a “Magna Carta.” They translated it from English to English.)

Unless you’re a veteran Mac enthusiast or a developer of one kind or another, chances are good that you’ve never used it. However, it remains one of the best software applications I’ve ever used. If Microsoft Word is bloatware for the laser printer era, then BBEdit became and remains the best, most efficient tool for the web: from code to content.

When I was in college, one of my first tech jobs was working at UCSB Extension. Although my job was desktop support, I ended up fixing a lot of web pages. It was 1996, and the World Wide Web was the place to be. My boss at the time was a young, bespectacled go-getter named Matt Groener. Probably half of what I know about computing came from him. (And given how much computing has changed since 1996, it really shows how much he taught me.)

As I was learning HTML in 1995, I had used SimpleText to edit my HTML documents. Why not? It saved plain text files, and it came free with my Mac. Almost immediately after seeing my working with SimpleText, Matt introduced me to BBEdit for composing web pages. Using it was an absolute revelation. It color coded syntax so it was easy to distinguish between text and markup. It indented text properly, which was key to nesting markup, such as lists and subheadings. It had the best search and replace I can ever imagine, and it even made Grep seem a little less scary.

The absolute best feature of BBEdit was “Save to FTP Server.” More than a dozen years before the era of the cloud, BBEdit actually allowed you to directly edit your HTML file from the server. Before this feature, my process was cumbersome and consisted of at least nine steps to make a simple change:

BBEdit eliminated all this. Saving an HTML file to a web server was as easy as saving it to your hard disk. It didn’t matter if the web server was in a closet a few yards away or part of a server farm on different continent.

Since then, I have probably used BBEdit for some purpose at least once a week. I’ve written loads of HTML and CSS, edited PHP and Javascript, and batch edited loads of class rosters and countless text files exported from Excel. And naturally, I wrote this blog post using BBEdit (in Markdown).

Thanks and many happy returns.

(Via MacWorld and Mother Jones.)

A large group of school children gathered at NYU’s Tisch Hall to commemorate the 101st anniversary of the Triangle Shirtwaist Factory fire. The factory was located at Washington Place and Greene Street in the heart of what is now NYU’s Washington Square “campus”. The fire and its aftermath led to the passage of a number of workplace safety and labor protection laws in the midst of the Progressive Era.