Almost six months ago, I sported a white wig to class. It was Halloween, and we were covering Andy Warhol, among other New York–based experimental filmmakers. When I wrote about my “costume” I said that Andy Warhol was an “was an artist who didn’t actually make any art.” To illustrate that point, I embedded a video of Warhol “painting” a portrait of Debbie Harry using a Commodore Amiga, a personal computer that was ahead of its time in graphics processing.

Aside from painting the Blondie lead singer and star, Warhol made many more images using the Amiga. Although not common, it’s not unusual for a technology company to supply artists with equipment to make art. For example, video artist Bill Viola received early video equipment from Sony in the 1970s as part of a residency with the Japanese electronics maker. Because Warhol had created these works using an obsolete computer system and saved them on deterriorating storage media, his digital art was thought to be irretreivably lost. Over the last two years, a very determined and resourceful “team of new-media artists, computer experts, and museum professionals” rescued these works from their digital tomb, including this image of a Campbell Soup can. 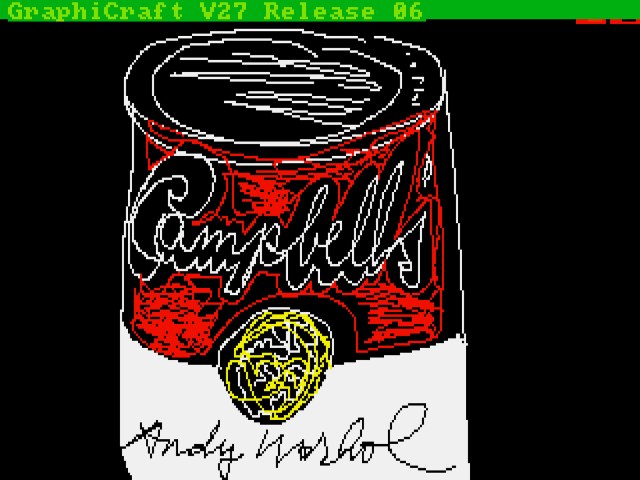 The problem with a lot of digital art is that it requires the original equipment to retrieve it. The Commodore Amiga was state of the art in 1985, but it is almost forgotten today. Moreover, the media used to store those files are nearly thirty years old, and have become brittle with age. Even trying to read those disks with a fully functioning Amiga computer and disk drive set up could irreversibly damage those disks, making those files lost forever.

It was not known in advance whether any of Warhol’s imagery existed on the floppy disks-nearly all of which were system and application diskettes onto which, the team later discovered, Warhol had saved his own data. Reviewing the disks’ directory listings, the team’s initial excitement on seeing promising filenames like “campbells.pic” and “marilyn1.pic” quickly turned to dismay, when it emerged that the files were stored in a completely unknown file format, unrecognized by any utility. Soon afterwards, however, the [Carnegie Mellon University’s Computer] Club’s forensics experts had reverse-engineered the unfamiliar format, unveiling 28 never-before-seen digital images that were judged to be in Warhol’s style by the [Andy Warhol Museum] experts. At least eleven of these images featured Warhol’s signature.

Warhol is an important artist, and it’s great to see a preservation effort succeed in recovering his digital art. But for every successful recovery of a high-profile artists, I wonder how many more artists‘ works are lost to digital rot.