As my month-long stay in Southern California drew to a close, I felt motivated to ride once more before returning to the late-January version of New York City, where cycling can often be an unpleasant experience. A couple of days before I left, I mapped a ride for my last full day in town. 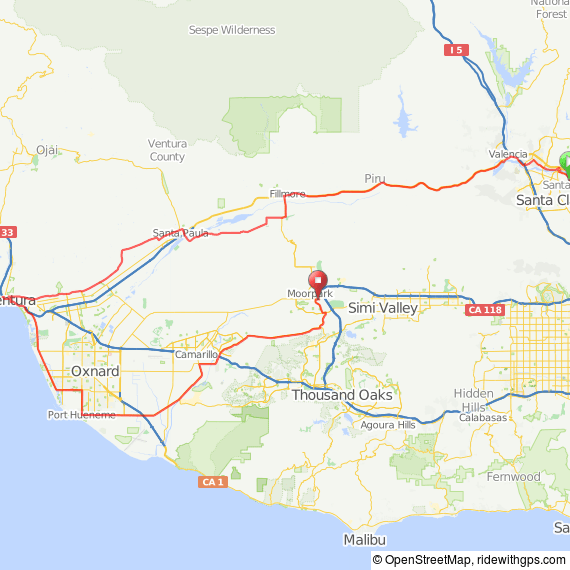 The ride started at the Metrolink station in Santa Clarita, followed the roads along the Santa Clara River west to the Ventura Harbor, and looped back east to finish in Moorpark. The start and end points took advantage of Metrolink’s generous bicycle policy that allows passengers to bring bicycles on to rush-hour, peak direction trains, and also the idiosyncratic schedule of Metrolink’s Ventura County line. The forty-minute ride from Vincent Grade to Santa Clarita costs only $6 for the morning segment, but in the afternoon, the Ventura County line only sends its LA-bound trains from Moorpark.

Also, at 92 miles, the ride is tantalizingly close to a century.

There’s a lot of different terrain covered in this ride:

Castaic Junction to Fillmore. For nearly 20 miles, you ride along the wide shoulder of CA-126, through the heart of the Santa Clara River valley. Looking at the Strava heat maps, it certainly looks to be a popular cycling route in the area. There are mountains on either side, a few rolling hills as you wind along this route, and plenty of farms in the distance.

Fillmore to Santa Paula. Most of this ride happens on Bardsale Avenue and South Mountain Roads. I enjoy this particular stretch because not only do you ride along the Santa Susana Mountains and Santa Clara River, you also pass alternating patches of oil fields and citrus groves that are vital to the regional economy.

Santa Paula to Ventura on Foothill Road. This stretch of road includes a significant amount of climbing but comes with the reward of sweeping views of the Ventura-Oxnard basin, the Pacific Ocean, and even the Channel Islands. It was one of my favorite sections from the New Year’s Day Kickoff Century ride.

Port Hueneme to Camarillo. South of US-101, this segment includes more farms. My favorite moment was riding on Santa Rosa Road next to a vast field of cilantro that I first found by smell.

Camarillo to Moorpark. This final stretch of the ride, north of US-101, goes through the suburban terrain of Santa Rosa Valley and Thousand Oaks rising over Las Posas Hills, overlooking the Tierra Rejada Valley, on Moorpark Road before descending to the Simi Valley and the city of Moorpark.

This particular ride took me significantly longer than I had expected. It had rained the day before, and there was a lot of debris on the road. Over the course of the day, I had three flat tires, including two on a ten-mile stretch between Santa Clarita and Fillmore. Also, since the construction on CA-126 I encountered last April continues, I had to dismount and walk my bike on the soft, muddy shoulder for about a mile. There was no room for me to pedal with automobiles traveling about 60 MPH zooming past me. I estimated that I lost about 90 minutes due to these setbacks.

I arrived at the end of the ride just after 4:00 PM, in time for Enegren Brewing to open its doors for the day and with plenty of time to catch the 4:57 PM train from Moorpark.

But I didn’t have to rush. My mother came to meet me, and we took our time driving back from Ventura County.