As a kid, my vision of the future seemed marvelous. We would have space colonies, interconnected computers on our wrists, instantaneous global travel, and cities without any trash. Of all these, in 2014, we’re closest to only achieving that last one.

Back in college, I lived in the rear apartment of a duplex, which outside of New York refers to a single building structure with two separate apartments. The tenant in the front was responsible for paying the garbage-collection bill, and we were supposed to split the cost between the two units. However, after a few months of living there, he stopped paying the bill and our garbage cans sat full as the hauling company stopped collecting our trash. Although my roommate and I appreciated saving the cost of having our garbage picked up, we realized that we couldn’t very well let our trash cans still full on the curb. A different neighbor down the street was nice enough to let us stuff some of our trash into his cans, but this was not an ideal solution.

We managed to toss a fair amount of garbage in unlocked dumpsters at night, but we also cut down on the amount of trash we produced. That’s where I learned to recycle as much as possible: cans, bottles, paper, boxes, and even scrap metal all were hauled to a local recycling center. Since then, I’ve been unable to toss a sheet of paper or an aluminum can into a trash receptacle. It feels as wrong as eating without first washing my hands.

When I first moved to New York, one of the greatest benefits of living here was the free curbside trash and recycling program. Having the city pickup my trash and recyclables and sparing me trouble of a weekly, illegal dump seemed like an absolute luxury. But since my recycling habits were deeply ingrained, I still recycled a fair amount of my refuse. But instead of driving it to a recycling center, I just put into a clear bag and left it on the curb on the designated collection day. Easy peasy.

Since last April, New Yorkers have been required to recycle all rigid plastics, and that has completely changed our balance of recycleables vs. trash. Our trash container is much bigger than our recycling containers. But since we stopped tossing plastics in the trash, our recycling container fills up in a day or two. Because the sanitation department picks up garbage three times a week but recycling only once a week, we have to empty our recycling container several times throughout the week and leave the clear bags in a holding area downstairs. Meanwhile, our garbage bags sits nearly empty for a week or until it begins to stink.

Another remarkable facet of the new recycling regime is how little we throw away from a typical takeout meal. A typical take-out meal will be packed in an assortment of plastic containers, buttressed by random pieces of cardboard, and accompanied by plastic utensils and paper napkins. All of that will go into a paper bag and then toted in a plastic bag. Aside from the napkins and the plastic bag, it’s all recyclable.

Perhaps, I’ve come around earlier to recycling everything than others, having been conditioned to obsessively do so since the late–1990s, but I would hope that the sanitation department adapts to the greater volume of recyclables and swaps a trash collection day to collect recycling.

And for the food scraps, which is not recyclable and always forced me to make frequent trash dumps around town during my college days, I can drop that off with the lovely woman from our local compositing program. 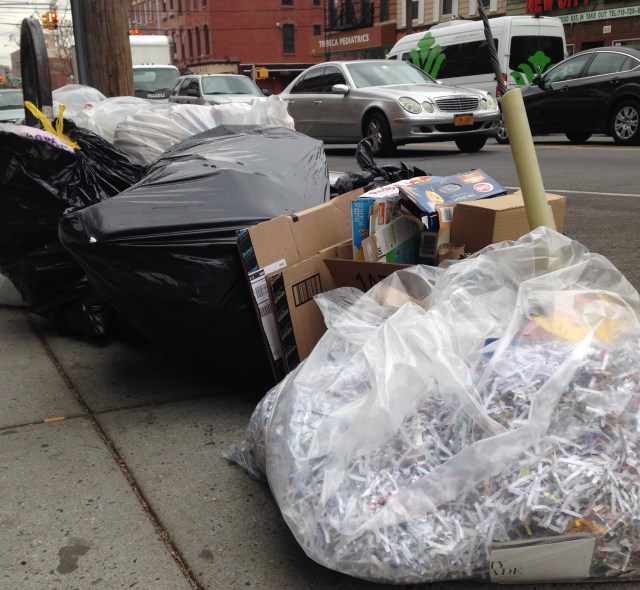