Tax Day was over a week ago, and, as usual, I filed an extension along with hefty payment for my estimated taxes due.

However, this tax-filing season was different for two reasons. First, there was a lot of concern about the IRS’s preparedness after the most recent government shutdown, where thousands of IRS employees were furloughed for about a month. Second, this was the first filing season where most taxpayers be affected by the changes wrought by the Tax Cuts and Jobs Act of 2017. The latter is the so-called “tax-reform law” that was a gift to corporations and the rich and a temporary tax relief to some workers, while growing the federal budget deficit by trillions of dollars.

After preparing my federal return, I found that much of the hype about the complexity of the new tax laws didn’t apply to me. Instead, I was alarmed at the elimination of two key income-tax reductions that I relied on to lower my tax bill.

However, one of the changes of the tax law was that it eliminated the personal exemption. In 2017, that amount was $4,050 for individual taxpayers with adjusted gross income less than $261,500, which I presume applies to most workers.

Most taxpayers couldn’t take this deduction, but as a part-time college teacher, I did often claim it. I work from home a lot, and I am constantly buying books, supplies, paying for subscriptions, and investing in computer hardware and software to teach and to support that work. This was especially true when teaching online classes. That work seems more suited for a 1099-type gig than a traditional W2-type job because I do a lot of that work on my own schedule—often well in advance of the actual classes—and I do not travel to campus to do that work.

Under the Tax Cuts and Jobs Act of 2017, the deduction for unreimbursed business expenses was eliminated for most workers. It only allows workers in certain fields—specifically those working in the armed forces, as qualified performing artists, as fee-based government officials—to take these deductions. These carve-outs seem curious. I can understand why we continue to allow a deduction for members of the armed forces. This is a Republican tax bill, and the GOP is party of unthinking jingoism. The same probably goes for private consultants who work for the government, replacing career government employees. But why allow performing artists to continue to take this deduction? Is it because the president was a reality TV star before entering politics and would likely return to that arena afterwards?

In effect, this tax bill eliminated incentives for me to:
1. live in a state with high taxes2
2. contribute to charity
3. invest in my job beyond the bare necessities

In an 1990s episode of the Simpsons, “The Day the Laughter Died,” Bart consults with attorney Lionel Hutz over a legal matter. Bart expresses confusion when the attorney asks for money up-front to take their case. “But your ad says, ‘Works on Contingency. No Money Down.’” Lionel Hutz explains that the ad has some errors. He promptly corrects it read: “Works on Contingency? No, Money Down!”

This so-called Tax Cut and Jobs Act was apparently similarly misnamed. If you have a job, you saw more tax… and more cuts to your ability to reduce your tax.

When I first started working at CUNY in 2008, I signed up for the Commuter Benefits Program offered to its employees. The program, now administered by WageWorks, allows you to set aside an amount of your choosing to be deposited onto a Commuter Card. The amount you set aside, up to $255 per month, will be deducted from your paycheck, pre-tax, meaning that those contributions won’t be taxed and you pocket the savings. 1

For New York City employees using WageWorks, the Commuter Card can be used to buy rides on the following systems:

Another way you can use your Commuter Card is to pay for uberPOOL rides. But before you start booking rides on POOL instead of riding the train or bus, be aware of a few nuances that might make using your Commuter Card a little onerous.

While I appreciate the creative thinking that made possible using transit funds for a certain Uber rides, I would love to be able to use my Commuter Card for bike share expenses. It’s something that other New Yorkers have desired, but alas, that is not yet the case.

For most taxpayers in the United States, “Tax Day,” the deadline for filing income tax returns for calendar-year filers, is on April 15. It’s a day that, upon reaching adulthood, every working American observes closely as a holiday or a tragic anniversary (September 11 or December 7, for instance). But in a post-Fordist America, where not everyone earns a living from a single full-time job, the deadline is six months later.

For filers who earn all of their income from a single full-time job, filing taxes is pretty simple. It gets a little more complicated if you own a house or have a lot of medical expenses, but for most of these people, you rush to file your taxes because you’ll receive a refund. The sooner you receive your money, the sooner you can buy that new TV or start on that addition to the house. In such cases, April 15 is the due date not the do date for filing an income tax return.

But not everyone has a single source of income. For instance, I cobble together a living from various teaching jobs at multiple colleges. Each one issues a Form W-2. In addition, I occasionally do other work, such as help a small company set up a secure file sharing system or edit videos for an art gallery. Each of those gigs yields a Form 1099-MISC. Also, in the last few years, I’ve offered my improving screen printing skills to a few places in need of custom-printed t-shirts. Each of those also results in another 1099.

All of the sources of income make for a complex tax return. Freelancers with multiple clients are no strangers to having a pile of tax forms showing income. In order to minimize one’s tax burden, it’s smart to record and to report business expenses as much as possible. This takes a lot of time, and for those of us who are overly meticulous or are terminal procrastinators, we file a request for a six-month extension.

Consequently, “Tax Day” for post-Fordist workers is really October 15. An extension to file your taxes is not an extension to pay your taxes. You still have to pay any amount due before April 15. But getting an additional six months to figure out what you actually owe is sometimes necessary. Write a big check in April, file later, and get a tiny refund at the end of it all.

I’m ashamed to admit that I did that this year. I didn’t file my 2014 tax returns until yesterday, October 15, 2015, two and a half months before the start of 2016. And like a lot of people I know with multiple sources of income, I know that I wasn’t alone.

Yes, folks, it’s Tax Day in America. Some taxpayers might have received refunds and are spending them on vacation homes, boats, or funding some silly Internet start-up. Some, like me, have put off until today to pay the government treasuries in Washington and Albany. Either way, unless you filed for an extension, the tax year known as 2013 is over. Congratulations, you made it!

Now that the tax year is finished, let’s reflect on what we’re going to do with all that money.

To get in the Tax Day spirit, the White House set up a web widget to show you how your money is spent. Enter some of your tax data and the tool will show you where your Social security, Medicare, and income taxes go.

Take a minute to fill it out. I’ll wait right here until you’re done. 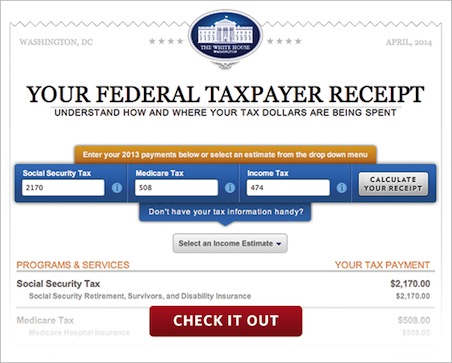 I bet you most of your income tax money goes to war. How did I know? Lucky guess…

In my case, defense and health care each get about $1,700 of my taxes. However, only $112 of it went to elementary, secondary and vocation education, and a little more than $75 went to science, space, and technology programs. For whatever reason, a negative amount of my federal tax money, $-1.35, went to financial aid for college students. This must be my share of any tax credits or deductions that I’ve been milking for almost of my entire adult life, which is why I get it back.

This breakdown seemed especially poignant after finding a U-Matic tape of an independent news-documentary television series from the 1990s, titled The ’90s. In trying to identify the tape, I searched the web for the series and came across an especially timely segment about persons who refuse to pay taxes that fund war. The segment has been digitized and available on YouTube.

One person in the segment says that half of tax revenue goes to war. Do you think they would feel differently if I told them it was only a quarter? Probably not.

With the Paschal moon hanging above us, thus signaling the beginning of Passover, the US tax filing deadline also hangs above us.

Like I’ve done for the last few years, I procrastinated until the last minute to file because I regularly have to send checks to both the federal and state governments. One of the many inequities of the American tax system is that someone who cobbles together a living from multiple sources usually has to pay when he or she files. When I start collecting a stack of W2s and the occasional 1099 in February, I start dreading preparing my tax return because I know I’m writing some big checks in April. 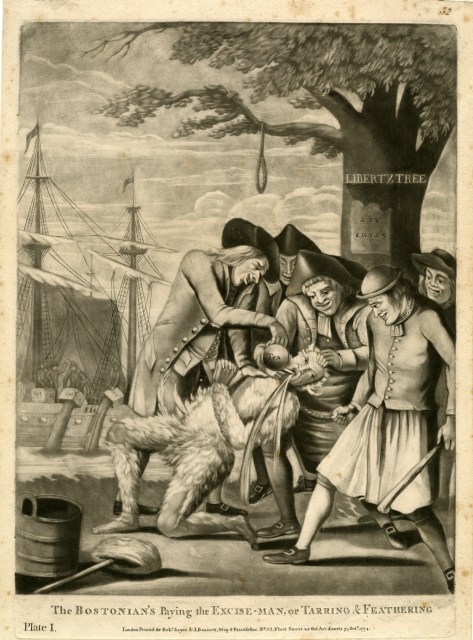 In years past, I usually either do my taxes on paper by hand or send them to an accountant. This year, I was short on time and money so I resorted to tax software.

Based on the recommendation from The Wirecutter’s Kevin Purdy, I went with the horribly named FreeTaxUSA. When I told one friend what I used to prepare my taxes, she joking asked, “Do they also offer check cashing and pay-day loans?”

Purdy’s article recommended three software packages: TurboTax for most everyone, TaxACT for people with more time and more complex situations, and FreeTaxUSA for experienced tax filers. Since I started working multiple jobs, I have learned as much as I can to optimize my tax situation, and I really didn’t need to answer questions about specific “life events.” I simply needed to report a bunch of numbers and calculate the allowable deductions. This was also very cheap: $13 for filing both a federal and state return, regardless of income.

Try it if this sounds like your approach to preparing your income tax returns.