Although I bike to work just about every day that it’s not raining (or snowing) and the forecasted high is around 40° Fahrenheit, I tried to get in the spirit of “Bring Your Bicycle to Work” Week. My current rides to work are a little less intense than usual because my semester at Fordham has ended, and I’m now only commuting to two jobs, instead of three…or four, as I did in the fall. If you’re biking to work this week, I hope you’re having a better experience than me.

I rode to NYU just fine and without incident. It was a gorgeous day, the morning temperature was already around 60° when I hit the road. I even arrived at work with a little sweat on my back, which is the first time that had happened since August.

On Sunday morning, I woke up with a sore throat, which led me to call of my plans to ride to Cold Spring. By Monday afternoon, it was pretty clear that I was coming down with a cold, but I was determined to ride to my next job, at Queens College, twelve miles away, through some of the least bike-friendly parts of New York City. I’ve done it before, most recently on an unseasonably balmy day in December, and I was lucky to be alive at the end of it. But that was five months ago, and I was ready for the challenge anew.

I arrived there fine. No driver tried to kill me, I didn’t get lost, and because it there was plenty of daylight, I was able to see and avoid every pothole—and there were many—on Grand Street/Avenue, a third-world, potholed artery between Williamsburg and Rego Park. By 6:30, I was ready to start my last Media Technologies lecture of the semester.

Very little invigorates me like lecturing. I might put insomniac undergraduates to sleep, but I am fired up because I get to hear myself talk for three hours. After building up all that energy, I was ready to ride home, nine miles, from Queens College to Long Island City. I strapped on my new lights and was ready to head out.

I didn’t get very far. I was cruising downhill about a mile from campus when I hit a pothole. Thankfully, I was riding in the drops so when the bike jolted back up out of the pothole, my hands continued to grip the handlebars, allowing me to maintain control of the bike. However, it did a number on my rear wheel, ripping a hole in the tube. By the time my tire went flat, I was already up the hill and was only about a mile from the nearest subway station. 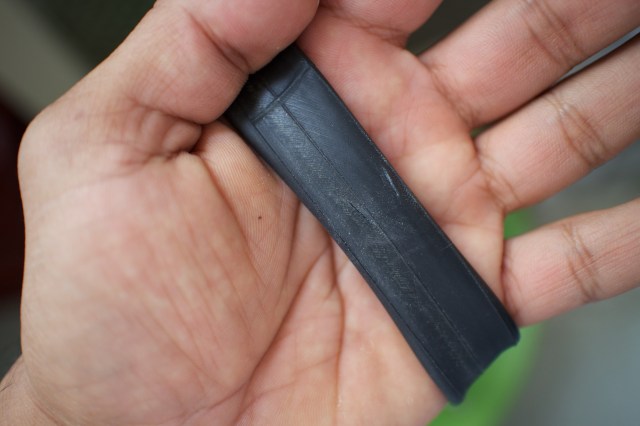 My first day of Bike to Work Week ended with a punctured tube.

All things considered, it was the best of all possible outcomes: I didn’t fall off the bike, my wheel didn’t bend, my tire was intact, and it was the rear wheel that took the brunt of the force, not my front. If it were the front wheel, I would have ended up on the pavement for sure. But still, my first day observing Bike to Work Week ended with a trip home on the E train.

The first thing I did in the morning was replace my damaged tube. Since I was removing the rear wheel, I cleaned out the drivetrain, which was long overdue. A half hour later, my hands were covered in grease and grime, but my chainring, freewheel, and chain were clean and shiny.

After putting everything back together, I began to inflate my tire. But at around 80 psi, my floor pump stopped pumping. I took it apart and I found that the rubber o-ring inside my pump, which is what pressurizes the air to inflate your tires, had ripped. I would need a new o-ring to rebuild the pump, which you can buy online from Specialized for about $5 (plus a usurious $8 shipping-and-handling charge). That still beats shelling out $50 for a new pump. 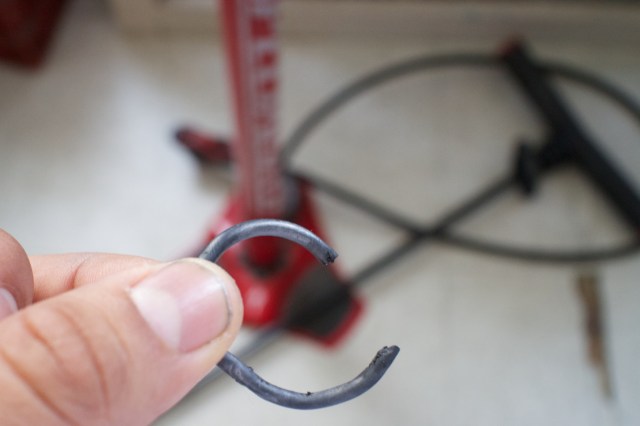 Apparently, you’re supposed to lube this once a year. I never did so in ten years of owning this pump. (Also, the linoleum in our kitchen is cracking.)

My plan was to head to the local bike shop to use their pump to get my tires to 110 psi. I strapped on my backpack, shoved my water bottle into my bottle cage, strapped my pant cuffs, and then headed out the door.

Notice that I forgot something. It wasn’t my keys, my wallet, or my phone.

By the time I got to Manhattan, I realized that I didn’t bring my lock. Thankfully, my coworker let me sneak my bike inside the building and stash it in a storage closet. Like the flat tire from the day before, it wasn’t devastating, but for a seasoned bike commuter, it was a rookie mistake.

That cold I was coming down with on Sunday and Monday has turned “full-blown” today. Although it’s a lovely day today, I am pretty much housebound today.

Looking forward, here’s what I am expecting for Bike To Work Week.

According to the forecast on Monday it was supposed to rain all day Thursday. That has been downgraded to breezy conditions. I’ll take that and ride to and from NYU.

Friday is National Bike to Work Day. A local bike and pedestrian advocacy group, Transportation Alternatives, stages fueling stations at the East River crossings. I’m volunteering at the Long Island City approach of the Queensborough–59th Street–Ed Koch Bridge, between 6:45 and 8:45 AM. If you stop by, I’ll hand you an extra Kind bar.

I’m still not sure which camp is mine.

The above links to Amazon are affiliate links. If you buy something through those links, I will earn a commission fee.