Quintron and Miss Pussycat are back with an EP, Erotomania: Quintron at the Chamberlain, and a tour. The tour comes to New York on Thursday, October 31—Halloween!—at the Knockdown Center in Maspeth, Queens, as part of Jonathan Toubin’s New York Night Train Haunted Halloween Hop party. The party, by the way, will also feature a bunch of cover bands, The Make-Up from our nation’s capital, NOLA’s Three Brained Robot, and Protext, who I once called my favorite Irish band of all time.

I found the entire Erotomania EP is available now on Apple Music, but I wanted to buy it to throw a few shekels towards Q & Ms. P’s way. Erotomania is available for preorder from Mind Meld Records on Bandcamp with one track, “Bohemian Caverns,” available now to stream.

I had considered preordering a digital copy—or even a physical one—but evidently only the “digital album” was available for an eye-popping $999 or more.

Yikes! I really like Quintron and Miss Pussycat, but a thousand dollars is simply too steep. Let’s hope that’s a typo. Otherwise, let’s hope I can scoop up something more affordable from the merch table at the Halloween Hop show.

Remember how I planned to ride from the Bronx to Beacon on Halloween Friday?

Those plans changed on Thursday after I received an email from the NYCC club president. I had proposed a North Fork ride from Huntington to Orient Point, similar to the ride I did in September instead of the NYC Century, but he said that taking the train from Greenport to Ronkonkoma might pose a challenge for a club ride. Indeed, that train from Greenport is a very small one, with only three cars, I think, and last time, we had to cram our bikes into a small area. If more than six riders were to come on my proposed club ride, we would be left scrambling for space and some of us might even be stranded.

He proposed that I lead a fifty-mile loop from Ronkonkoma, which would rely on a train with more regular service and with more capacity for bicycles. He sent me a few cue sheets, and I reviewed them during a break on Thursday. He also suggested, in the interest of adding more miles, finishing in Babylon, which also has more train service. Since I was pressed for time on Thursday, I misread his suggestion and that I should ride from Babylon to Greenport. In my head, that seemed like an equivalent ride to Huntington to Greenport so I agreed to lead that one.

So, instead of riding to Beacon, I decided to scout the ride from Babylon to Greenport. In passing, I asked if the club president wanted to join. He did, and the next morning, we connected on a Babylon-bound train in Jamaica for a Halloween ride towards Ronkonkoma and Riverhead.

This week was peak foliage on Long Island, and the leaves were in their autumnal greatness.

And there were haunted houses ready for Halloween.

And a decommissioned but well-preserved gas station in Yaphank.

After I posed for this photo, someone drove right up to the pumps, expecting to fuel up, until he realized that it was out of service and drove on in search of gasoline elsewhere.

In Yaphank, our two-man riding group split up. He headed back to Ronkonkoma and I continued east towards Riverhead and then to Greenport.

There were more leaves in their full glory.

Further east, there were even more signs of Halloween, such as this corn maze in Cutchogue.

For whatever reason, every ride I did on Long Island this year was with a headwind. This one was no different, and I had the wind in my face for the entire seventy miles. A few miles after Riverhead, I was getting cold and tired. I had planned to scout a hillier route along the Long Island Sound, but the headwind made reconsider. Instead, I followed NY-25 the whole way from Riverhead.

When I saw the carousel in Greenport, one that I had last seen with my mom in August, my exhausting journey on two wheels was finished.

It’s rare when Halloween falls on a weekend evening, such as it does this year. But for the most part, we usually observe it on the Friday or Saturday before October 31. In recent years, that has produced some mixed results.

Three years ago, on Friday, October 28, Halloween sucked because we all learned that my mother had breast cancer for the second time. Feeling helpless a continent away, Sarah took me to a Halloween movie at Loews Jersey and a then a party in Long Island City. It helped take my mind off my mother for a little while.

Aside from the bad news in my family, the festivities for the rest of the weekend were muted because the city was hit with snowfall on Saturday, October 29. It was, by some accounts, the earliest New York City had seen snow since the Civil War.

Two years ago, with my mom’s cancer treatment behind us, we were ready to celebrate on Saturday, October 27. Sarah and I joined a few friends and went to that same Halloween party in Long Island City. I found a half-assed pepper costume, and she dressed up as a pineapple.

We had a blast! One of the nice things about the night of Halloween party was the warmth, but that warmth would soon subside as we were hit by Superstorm Sandy a day later.

As I’ve said before, the storm was big enough to cancel Halloween in New York City. No one was in the mood to do celebrate.

Last year, the parties happened on the day after Halloween, but we didn’t go to any. Sarah had just been injured in a bike accident a few days earlier, and she wasn’t in the mood to be festive. Neither was I. Instead, we stayed home and got take-out or something.

I also had to teach class on October 31. Since the class was on Experimental Film, I sported an “Andy Warhol” wig to class.

That’s about as far as the festivities went.

Because of this mixed track record, I couldn’t be less enthusiastic about Halloween this year. A great deal of this lackluster enthusiasm is because of Sarah. Despite how good or bad our Halloween experiences were, we were always together, and this year we won’t be.1

This Friday is not only Halloween, but it is also the only day of the weekend where the temperature will be above 50°. It is also the second-to-last day of Daylight Savings Time. So, much like I did last year, I’m going to ride up through Westchester and Putnam counties for the last chance I will have to do that after 4:00 PM until spring. It will also give me the chance to really see the leaves.

Although the New York State Fall Foliage Report says that they are just past peak at this point, that’s just how I like it.

The ride will start in Woodlawn, Bronx around 8:00 AM. I plan to head to Connecticut for a few miles and then to Bedford, New York. From there I will continue north to Croton Falls then to Carmel. At that point, I will decide whether I will head northeast for about five miles to Brewster to catch the train back to New York or to continue northwest for another twenty miles towards Beacon.

And if when I get back there’s a worthwhile Halloween party, I’ll be costumed as a very tired cyclist.

Yet again, I find myself having a class to teach on Halloween. Two years ago, I had to give a midterm exam, but I lightened things up by giving extra credit points to anyone who dressed up for the occasion. Most memorably was one student who dressed up as a midterm exam.

Last year, as we know, there was no class due to a little storm called Sandy. In fact, not only did we not have school, Halloween was basically cancelled in New York. Canceling Halloween in New York almost seems unthinkable, but it happened.

My class tonight is Experimental Film at Pratt Institute. We’re not covering anything particular spooky or related to the dead or undead. We’re just looking at a three postwar avant-garde filmmakers who covered New York as a subject, namely Rudy Burckhardt, Shirley Clarke, and Andy Warhol. While your common New Yorker could not identify the first two filmmakers if he saw either of them, everyone knows what Andy Warhol looked like. 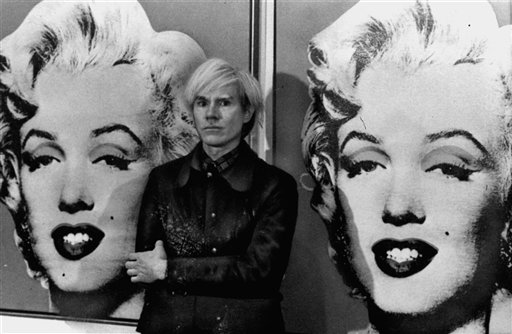 Andy Warhol, stands in front of his double portrait of Marilyn Monroe, at The Tate Gallery in London, February 15, 1971. (AP Photo)

If you don’t know who Andy Warhol was, he was an artist who didn’t actually make any art. Here he is “painting” Debbie Harry with a Commodore Amiga.

To keep the spirit of Halloween alive, I bought a wig. 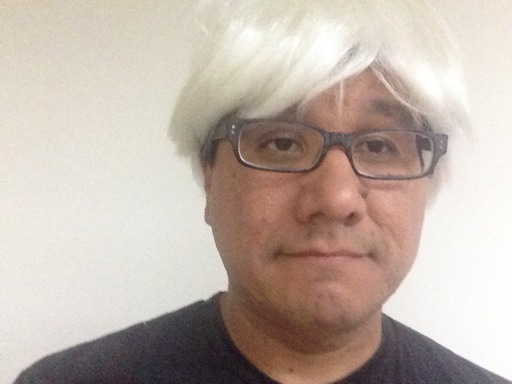 At least I am acknowledging that I’m wearing a costume and not acting as an impostor as Allen Midgette did at the University of Utah in 1967. 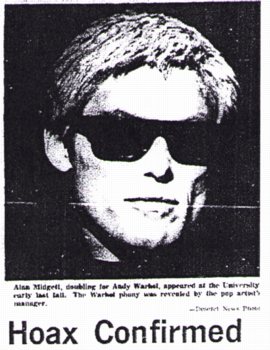 If you’re wondering about the rest of the costume, you’re not missing it. There’s no more to my costume. I’m just wearing a dark t-shirt and black slacks. Because I’m still riding my bike to class, I’m also wearing a pair of Converse high tops, Showers Pass rain jacket (30% of chance of showers, they say), and helmet, all of which is black and keeping with the sullen artist image.

But at least I got the hair right, even if it’s wrong for my skin tone.

Sarah, who occasionally takes the East River Ferry, sent me this photo to show that the relatively new service is already haunted. Yikes!

My students at CUNY Queens College took their midterm exams on October 31, Halloween, and I figured that offering students who dressed up for the occasion a few points of extra credit on their exams would bring much-needed levity.

In my American Film Industry class, a handful of students took advantage of my offer, and two even accepted my challenge to dress up as a midterm exam. In the photo above you can see the winner of the Best Midterm Exam Costume prize, which was worth all of five points on the midterm exam. Other students who dressed up for the occasion received a measly three extra-credit points.

The New Technologies class also dressed for the occasion, and a few of them actually had some pretty great costumes. One student, from the Film Industry class, tried to double dip and wore his costume to the evening class. I’m not sure how to handle the logistics of the extra credit.

If you think that it’s distasteful to offer students extra credit for wearing a costume, please keep in mind that getting credit for a costume equated to less than the value of one true-false question. Anyway, I don’t see the extra credit skewing the results of the exam too much since I suspect very few students will take advantage of the offer.

In any case, I really hope that I don’t have to teach class again on Halloween or, worse, have to give a midterm exam.