Today, my Experimental Film class took their midterm exam. Since we’ve focused on analyzing specific films from the historical avant-garde, the exam consists of an in-class portion and a take-home portion:

In class today, I screened four clips, each two to three minutes in length. Students were to identify the title, filmmaker, and year of each clip. One of the clips will be from a film we have not studied in class but should be familiar.

After class today, students went home and began writing a 200-word rationale for identifying each of the four clips screened in class. Their analysis is due before class next week.

If you’d like to play along at home, here are the clips I screened in class today. Mind you that the clips are based on what we’ve studied during the first, second, third, fourth, fifth and sixth weeks of class.

This particular clip is more challenging than the first three because it is from a film we did not screen in class. However, this film bears a strong resemblance to film we did study. Can you name the film it resembles? Can you identify this particular film?

As with the final exam for the history of silent film class, I will post the answers and some abbreviated notes about each clip at a later date.

Since the beginning of September, Turner Movie Classics has been running a ridiculously long festival of movies representing the history of cinema. The festival last fifteen weeks, into December, which happens to be the same duration of a college semester. Each week, TCM airs an episode of the 2011 documentary The Story of Film and a program of representative films to accompany each episode.

It doesn’t happen too often, but events like this make me miss cable. Sometimes.

A few weeks ago I posted images of six films I screened in my History of Cinema class at Queens College. As part of the final exam, students were to name five of the six films and provide the country of production and, if appropriate, the avant-garde movement.

Here are the answers:

The Man with a Movie Camera

What can I say about this film? There are two items in the picture, a man and a movie camera, so I figured that would be easy. I was also looking for an image from this film that would show off two influential art movements in the Soviet Union: montage and Constructivism.

The challenge was to find a still that had montage within a single shot. Montage generally edits two shots together to create a specific and deliberate meaning, but I can’t show that in a single still. This one demonstrate the ability of montage to show “editing” within a single shot. Moreover, Constructivist integrated machinery into everyday objects, including the human form.

The Cabinet of Dr. Caligari

Not to spoil too much here, but in this still, Alan reacts to seeing Cesare in his room. He is terrified. In this shot, Cesare’s figure casts a shadow against the wall on the right side of the frame. The set of the room is highly stylized. It is not shown in classical Renaissance perspective, but instead has very sharp angles. This approach to composition was common in German Expressionism.

Nosferatu: A Symphony of Horror

This is another German Expressionist film but from 1922 and directed by F.W. Murnau. The shadowy composition is again present here and is there to cast a sense of terror. Moreover, no one who has seen this film will forget Count Orlock’s appearance. It has to be one of the most chilling figures in cinema.

This is the seminal surrealist film, produced in France, by future film icon Luis Buñuel and celebrated painter/sculptor Salvador Dali. Early in the film is perhaps one of the most unforgettable images in cinema history: the cutting of a woman’s eye. The film rejects any narrative causality and instead follows the logic of dreams, as surrealists were wont to do.

Sunrise: A Song of Two Humans

Yes, it’s another film by a German filmmaker, F. W. Murnau. But this film, Sunrise: A Song of Two Humans, was produced in the United States, not Germany, and was stylistically similar to Expressionism, although it was made well after the movement had its hey-day in Germany. This still is from the first third of the film. The man, played by George O’Brien, is about to kill his wife, played by Academy Award–winning Actress Janet Gaynor, and make it look like she accidentally drowned. You can see the compositional similarities between this image and that of the still from Caligari. Also, O’Brien’s posture is not unlike that of Orlock in Nosferatu.

Students in my class would have undoubtedly noticed that I absolutely love this film—it’s easily one of my all-time favorites—and some would remember it because I heard a few people crying at the end of the film.

As *Sunrise* is perhaps the last silent film made in Hollywood, it also might be the best. 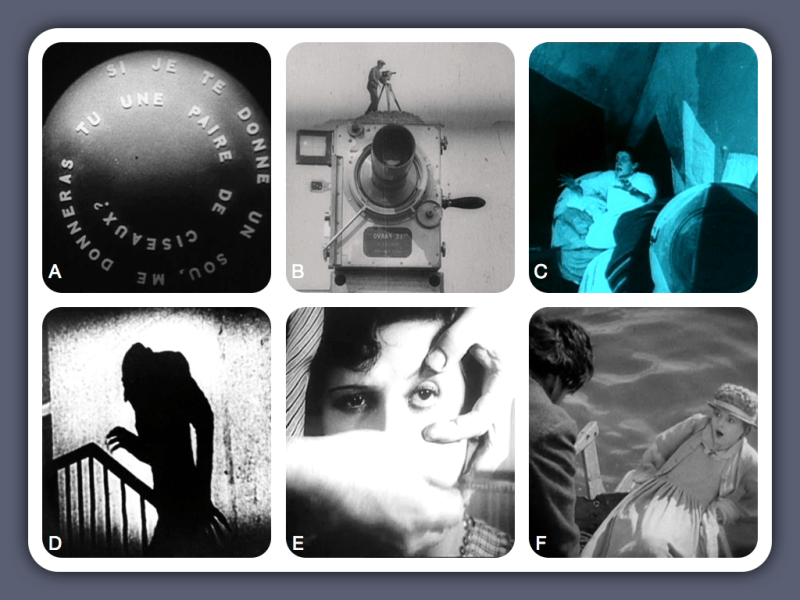 Do you fancy yourself a fan of silent film?

This was part of the final exam in my silent film history class. Can you give the title, country, and the associated avant-garde movement?

Much like last year, I am scheduled to teach Media Studies 300W, Media Criticism, at Queens College. The class will meet on Monday, Tuesday, and Wednesday evenings, from 5:30 – 7:45 PM, between June 3 and July 15.

This class satisfies the all-important writing requirement, but instead of stretching it out over fourteen grueling weeks, we will be condensing the class into six weeks. And because it’s summer, it will be more relaxed than it is during the fall or spring semesters. There will not be any overwhelming amount of material to memorize. Instead, we will read and respond to some very engaging issues in media studies.

To enroll, visit the Summer Session website and enroll in section 7627.

The syllabus for History of Cinema I, 1880–1930, at CUNY Queens College, is now available on my professional website.

From the course description:

A survey of international film history from the beginnings of public film exhibition to the coming of sound. This course covers early motion picture technology, the development of narrative and editing techniques, and the growth of the studio system and national cinemas around the world.

I am absolutely thrilled to teach a semester-long class on only silent film. Some students will probably feel otherwise, but it will be a worthwhile challenge to excite them about film when it was new and full of limitless possibilities.

We will be looking at the poetic realism in my Early Film class at Pratt this semester. Since we can only watch one film in class, I encourage students to watch this newly restored film at Film Forum to get a richer sense of the style and sensibility (and sense of doom) of poetic realist films.

The syllabus for Early Film to World War II, at Pratt Institute, is now available on my professional website.

From the course description:

This course is a survey of film history from the beginnings of public film exhibition to the aftermath of World War II. We will look at industrial practices and stylistic developments, such as the development of motion picture technology, the development of narrative techniques, the establishment of national cinemas, the transition from silent to sound cinema, the dominance of Hollywood, the effects of World War II, and the ascendance of television, and the fall of studio system . While this course is primarily focused on Hollywood and American cinema, the contributions of major national cinemas are also explored.

This is the first class I’ve taught at Pratt, and I’m looking forward to working with a new set of students.

Next month, Yale University is hosting a film conference devoted to European filmmaking after the financial market crash of the late 1920s.and ensuing global economic depression of the 1930s.

The conference does not appear to have a website so I am reproducing the conference announcement, which I received via email, for anyone who might be interested.

All featured films screened on restored or archival 35mm prints (unless noted) with English subtitles.

In the history of Europe, 1930 was particularly marked by the impact of the Depression in the aftermath of the American stock market crash of 1929. This impact could be seen, for example, when Miguel Primo de Rivera, prime minister of Spain and head of a military dictatorship, was obliged to resign due to a financial crisis and by 1931 the king was forced to flee as republican and socialist parties won a big majority in local elections. In 1930 Germany also saw increased polarization in its political world as the communists, socialists and Nazis emerged as rivals in a struggle for power that culminated in the Nazi take-over of 1933. The Soviet Union, which was less directly affected by the Depression, saw a brutal collectivization campaign in this year and ominous show trials. The period around 1930 was also fateful for European film as sound film began to replace silent film at an accelerating pace. The conference will address the implications of this ongoing shift both in terms of its impact on filmmaking, production and distribution, and in terms of how the introduction of the talkies exacerbated the language barrier between and within European countries and became a severe problem in helping different cultures relate through film

Over the last couple of weeks, George Stoney (born 1916) and Chris Marker (born 1921), two documentary filmmakers with careers dating back to the 1950s but with very different filmmaking styles, passed away.

Stoney was someone who made documentary films than just about anyone else who has lived, but his teaching at NYU liberated his most recent work. Because he earned income from teaching, he could afford to make documentary films about topics of his choosing, not simply because they paid the bills. He could document a conversation with the philosopher and activist Paulo Friere, Finding Friere, or he could be an active agent in community television. His life is documented in George Stoney: A Life on Film and the generically named George Stoney Documentary, two shorts both available on YouTube.

Marker was more of a film essayist than a visual documentarian: he used the documentary form to explore deeper, more philosophical themes that were not always inherently visible. Because of the stylistic complexity and multimodal narration of his films, Marker has been a darling of film scholars, and he shows up on many film studies syllabi. I showed Sans Soleil in a spring 2011 version of my History of Cinema III course at Queens College.

If you haven’t seen any of Marker’s films, there are high quality streaming versions on Hulu Plus of his two most popular films, courtesy of the Criterion Collection: the science fiction short La Jetée from 1962, and the fictional memoir and essay film Sans Soleil from 1983.

These two luminaries of the documentary from will be celebrated at December’s Visible Evidence XIX Conference in Canberra, Australia.