Within eight hours of landing at JFK Airport after spending a month in Southern California, I was in a car heading up to New Haven, Connecticut for a day trip. The last time I was in New Haven was a bit over five years ago on a bike ride from Greenpoint to New Haven. My experience of New Haven was a bit rushed. I had ridden with a group from the New York Cycle Club, and we had split up into two groups. By the time my group had arrived in New Haven, there was only one other person with me, and the two of us headed to BAR on Crown Street. Many locals insist that BAR is one of best pizza places in New Haven.

Oh, and about New Haven pizza: they refer to it as apizza, which they pronounce as “ah-beets.”

I have a bad joke about this: “I hear the pizza is so good, they don’t even need correct spelling.”

On yesterday’s trip to New Haven, we went the tourist route. Wooster Street in New Haven’s Little Italy has two of the oldest apizza places in town. Unlike BAR, which has a very contemporary decor, Frank Pepe Pizzeria Napoletana and Sally’s Apizza, both on Wooster Street, predate World War II. Frank Pepe’s, for example, opened in 1925, and Sally’s, started by Frank’s nephew Sal, opened in 1938. Even Modern Apizza, on State Street, opened way back in 1934. BAR is by comparison an infant, having opened in 1991.

As is common with these touristy places, there’s going to be a wait. Fortunately, we arrived just before noon on Sunday, less than a half-hour after Sally’s opened and that queue appeared pretty short. As we drove by, I jumped out of the car to wait in line while my friends found a place to park the car.

We waited about thirty minutes in line, which may seem like a long time, but we lucked out in a couple of ways. First, it was a mild and sunny January day. The sun was shining on us while we waited so we weren’t shivering from the cold, as one would this time of year. Second, the party of eleven that was immediately in front us in line abandoned their place in line. I suspect they went to Frank Pepe’s instead, but no matter the reason, our party of four was seated promptly after they left.

Once inside, we debated what to order. The ringleader of the group wanted to recreate the clam pie from Frank Pepe’s, but as none of us had been to Sally’s we figured it would be best to get a classic pie and a specialty pie.

The classic pie was a fresh tomato pie.

This is the prototypical New Haven apizza. It is a charred crust topped only with tomato sauce, some herbs, and a bit of cheese—likely Parmesan. We requested that half the pie be topped with sausage and onions.

The specialty pie was something very novel for us accustomed to New York-style pizza: a white potato pie.

This was absolutely delicious. The potatoes were thinly sliced and baked in a cream sauce. It was like having potato-au-gratin on a pizza.

Last year, I made a sweet potato–au-gratin dish using Stephanie Izzard’s recipe that has been a hit every time I’ve brought it to a dinner party. I am tempted to experiment making a pizza pie using this recipe.

Yesterday, I learned the answer to one of life’s burning questions.

I learned that it is about 92 miles from Greenpoint, Brooklyn to New Haven, Connecticut.

I also learned that the Two Roads Brewery in Stratford, Connecticut is 70 miles from Greenpoint.

The last long ride I did last year was one of my favorites. It was a long but flat run from the Bronx to New Haven, Connecticut, along what one day could be the East Coast Greenway. For what the ride lacks in climbing difficulty and sweeping vistas from up high, it makes up for it in distance. Without too much effort, you can ride almost 80 miles, or over 90 if you start in Manhattan, and still finish before it’s dark, which at this time of year happens well before 5:00 PM.

I was thrilled to have the chance to ride it again as it could very well be the last long ride I do before March. I even started in Greenpoint all the way to the start in the Bronx.

This year, I was deputized as a co-leader of ride and leader the “fast” group, riding at about an 18-MPH pace. As an official co-leader of the ride, I, in turn, deputized another rider as a co-co-leader of the fast group. Knowing that she is a beer aficionado, I asked her if she wouldn’t mind stopping by the Two Roads Brewing Company’s tap room in Stratford. Our route passed right in front of the brewery about 55 miles from the ride’s start in Pelham, and she agreed that we could not afford to miss an opportunity to fill our growlito for the train ride back to New York City.

After stopping in at the brewery, our small, “fast” group of four riders became even smaller. Our fearless co-leader had to return to the city for an important evening engagement, and another rider was taking it easy as he was returning from an injury earlier in the season. That left just me and one other rider to finish the route at our accelerated pace. The “slow” group, consisted of five riders, and rode at a more leisurely pace.

In all, I rode 92.8 miles, finishing in New Haven at about 4:20 PM. For as fast as we were going, the “slow” group must have finished no more than ten minutes behind us because they caught the 4:45 train back to New York. One of things that frustrates me about club rides is after traveling for many miles, we seemingly always arrive at our destination only to take to take a train right back to New York. It’s safe to assume that as cyclists, we’re an intrepid group and wouldn’t mind exploring a little.

My fellow rider agreed that we should at least grab some food and a beer before boarding the train in New Haven to New York City. Upon the recommendation of a staffer at Two Roads, we went to BAR on Crown Street, a huge restaurant-bar that welcomed us with a pint, a pizza, and a place to stash our bikes inside.

It made for a more interesting destination than the New Haven train station. New York to New Haven via the East Coast Greenway

Did I say that the season for long bike rides that involve the train is over? I was wrong. Yesterday, I went on yet another weekend club ride. This ride was from Pelham Bay Park in the Bronx to New Haven, Connecticut.

Cycling to New Haven in mid November might not seem like the greatest bike ride. The high temperature this time of year is in the low 50s, not 60° as it was yesterday. (We did however get some rain.) The route is reasonably long, about 77 miles from the Bronx to Union Station in New Haven, but it’s a very flat route. We followed the proposed East Coast Greenway, along Long Island Sound, with a mere 2,857 feet of elevation gain. That allowed us to keep a good pace and finish before sunset, arriving in New Haven around 4:15 PM.

Although the temperature was warm, the sky was overcast from start to finish. The threat of rain started around mile 20, and then started a light mist. Around mile 40, the mist turned to drizzle and then to light rain. Thankfully it never got worse than that. At mile 47, we ate lunch and waited out the rain. By the time, we headed out, the rain had stopped, and it never started again. 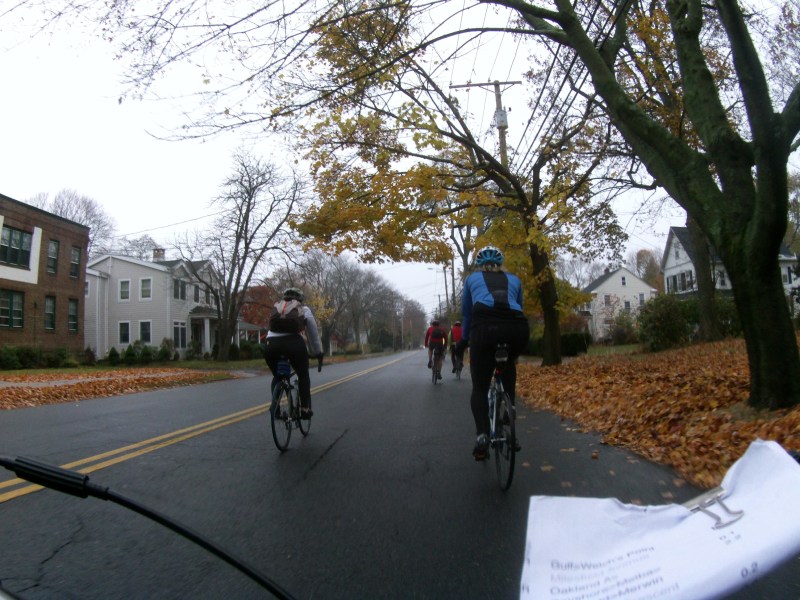 The rain, however, left some very slick road conditions. Just after leaving Fairfield, I rode around a corner and my back wheel grazed a wet steel grate, and I went down. In the summer, this would have ended my day. But because it was autumn, I landed on a pile of leaves. I had a small scrape, but that’s it. Once I brushed the leaves off my clothes and realigned my chain, I was fine the rest of the day.

The rest of the day was peppered with spills and near misses due to slippery conditions. One guy in our group also slipped as we were crossing railroad tracks east of Bridgeport. He fishtailed and then hit the asphalt. He recovered and finished the ride, but it seemed he hit the ground much harder than I. Crossing a steel bridge is hard enough on a bike, but please don’t attempt it on a rainy day. We all successfully crossed one  near Stratford (I think), but not without some very scary slipping and fishtailing. Had one of us fallen, one rider speculated, we would have been bloodied by the steel grates on the bridge. 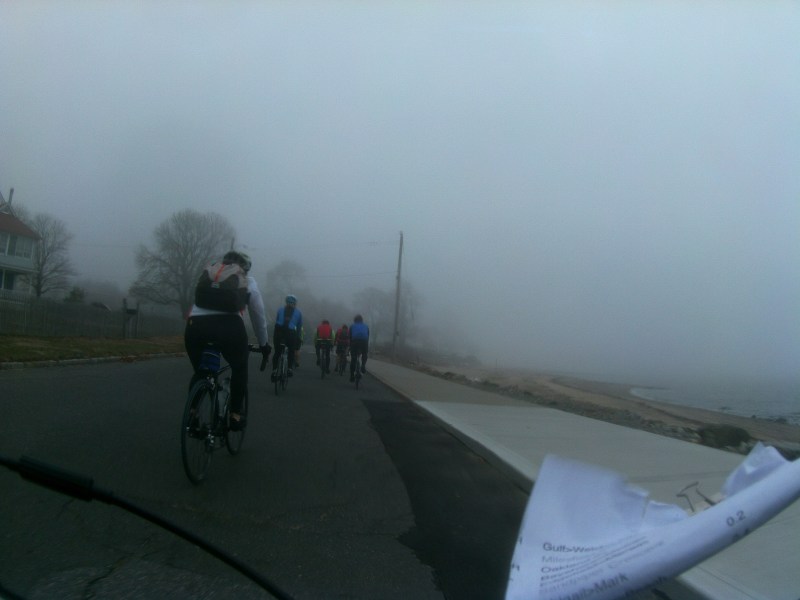 Nearing the end of the ride, the humidity and the dropping temperatures combined to create some very thick fog, especially along the shore. For a five-mile stretch, I actually took off my glasses because it was easier to ride with blurry vision than without seeing more than ten feet in front of me. We rode prudently, keeping a slow pace and with our blinky bike lights set to the solid position.