Pardon my silence over the last three weeks. I was asked to take an unpaid gardening leave for two weeks, and I stayed away from the computer as much as I could. And after my digital sabbatical was over, the beginning of the semester loomed on the horizon. Between the two, I stopped posting on this site.

I should have said something about it, but I was surprised as anyone that I would take such an extended leave from posting.

Before starting my leave, I planned to a bunch of awesome things, although tending to a garden was not one of them, including:

As is the case with most of my grand plans, I did very few of these. Yes, I did go to the beach once, and I did go to Baltimore to watch the Mets play at Citi Field South Camden Yards with Steve and a few friends. But I didn’t visit any new places, such as the northeastern coast of Maine or one of America’s “Last Great Places”. Instead, I did a few familiar bike rides.

And since returning to work, I assembled syllabi for three classes:

With the long summer break and my own gardening leave behind me and the semester beginning today, I recognize that I didn’t completely “turn off” during the break or do something completely unfamiliar. But I did do things that I enjoy and do pretty well.

And, yes, I’ll resume posting to this site again.

Remember how Andre and I rode to Peekskill last fall along both the South and North County Trails in Westchester?

We did it again this past Saturday. The two of us had a free day because we’re both kind of over softball, and I insisted that we ride because I needed a break from life. My new counselor agreed that it would be best that I get out and do fun stuff, such as play softball and ride my bike, to take my mind off how hard my life has been for me lately.

We got a late start because Andre insisted on making breakfast, but it was worth it.

We decided that our best bet was to take the subway to Woodlawn in the Bronx, and catch the South County Trail from there. It was an nice ride, despite fighting a pretty steady headwind most of the way. When we arrived at end of the South County Trail in Elmsford, I remembered that we could break-up the flatness of the ride by heading up Payne Street, east of Route 9A.

For those who aren’t familiar, Payne is one of the steepest climbs in Westchester, maximum grade of 12%, but I swear that must also be the average grade. Andre did really well going up, and I was only about a half minute behind him. That was pretty good because the last time I had to stop and take a breather about ¾ of the way up. When I joined him at the top and was still panting heavily, I asked him, “Hey, can we stop at a gas station to get some water?” He asked where we could find one, and I replied, “oh, there’s one at the bottom of the hill we just climbed.” Andre had not realized that climbing up Payne was completely unnecessary because just as soon as we went up, we were headed back down the same hill. Sorry, dude.

As usual, we left the trail in Yorktown Heights. This time, however, we took a different route that would put us along the Croton Reservoir. There was some climbing, but for the most part it was a nice ride with lots of rolling hills and some exhilarating downhills. There were also some pretty views of the reservoir.

As I had not taken this route before, I didn’t realize that one of the roads, Montrose Station Road, is closed.

After reviewing some alternate routes, Andre and I decided that we would just attempt to ride through the closed road anyway. “How bad can it really be?”

It’s bad! The road is closed because it isn’t an actual road. It isn’t even a gravel road. It is more of a river bed with tire-shredding rocks along the way.

We attempted to ride this with our road bikes but quickly realized that we were in store for a 1.6 mile hike, in bike shoes, along a very rocky road.

After arriving where the “road” intersects with Washington Street, we cruised downhill for another couple of miles and, voila, we were in Peekskill!

Although it’s not unusual to see bicyclists at the Peekskill Brewery, there were so many bikes hanging outside of the brewery this Saturday that it will only be a matter of time before the Brewery will look like the Runcible Spoon in Nyack, a popular destination for cyclists from New York City who ride up 9W and anger the residents of the Hudson River towns along the way.

If Peekskill is really going to be the new Nyack, the brewery is going to need a bike rack, too.

After a long day on the bike, powered by nothing more than Andre’s breakfast and a Clifbar, I had a pint of my new favorite beer, a pork confit sandwich, and a delicious pickled vegetable plate.

That was all paired with some bittersweet memories, too, because the last two times I was at the Brewery, I was with Sarah.

Andre and I hopped on the 5:35 train back to the city and were both in good spirits upon arriving at Grand Central Terminal, even after my customary train nap between Croton-Harmon and Spuyten Duyvil.

And like every other bicyclist in New York City, I’m sure we’ll be back.

Sarah’s dad passed away last March, and we miss him everyday, especially on Father’s Day. One of the things that David loved to do was ride a bike. When I first visited the family home, I saw his road bike hanging in the garage. The bicycle is a beautiful English-made Raleigh steel frame with drop-tube shifters, Campagnolo components, and a classic Brooks B17 saddle, and it serves as a testament to his love of cycling. Some time in the 1980s, he and his brother Charles started the tradition of riding the Hilly Hundred in southern Indiana, which I rode for the first time as the family revived the tradition last year.

To remember David on Father’s Day, Sarah and I rode to Peekskill, New York. There’s nothing significant about Peekskill with regards to Sarah’s dad, but we chose that destination because of a few practical matters:

To get to Peekskill, we followed a similar route that Andre and I took last fall when we rode to the Peekskill Brewery. Most of the ride was on the South and North County Trails in Westchester County. 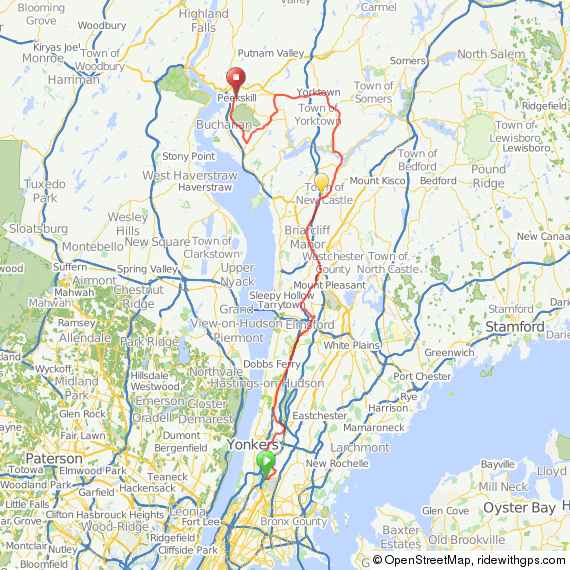 That made for an easy ride because it was relatively flat, and there were no cars anywhere on the trails. To avoid the bothersome junk miles in Queens, Manhattan and the South Bronx, we elected to ride the subway to Van Cortlandt Park and cycle to the start of the trail in Yonkers. My initial plan was to take the 4 train to Woodlawn, but the 4 train was not running past 149th St-Grand Concourse. Instead, we took the D train to Norwood and pedaled the rest of the way to the start of the trail.

Incidentally, here’s how to get from the D train in Norwood to the start of the South County Trail in Yonkers:

There were a few times we had to leave the trail to continue. The first time is in Elmsford. The South County trail ends there, and were forced onto the local roads. There are two ways to get to the North County Trail, none of which are marked as far as I could tell.

The easiest, most direct way is to make a right on NY–119, where the trail ends, then a left onto US–9A, and another left turn on Warehouse Ln. From there, the North County Trail is on your right just before you reach the end of the road.

A more bicycle-friendly way, with a lot less traffic, is to do the following:

Another time we had to leave the trail is just north of the Croton Reservoir. Although I’ve never seen it myself, the word on the street is that there is a big sinkhole in the trail that required us to detour onto the roads. The bypass was around two miles long and included the first climb of the day.

The rest of the way was pretty easy. We took the trail the rest of the way to Yorktown Heights and then followed US–202/NY–35 west to Cortlandt. Most cyclists prefer to head south on Croton Avenue to take the Blue Mountain Reservation, and that’s the way we took. A more direct and presumably less scenic route is simply to stay on US–202/NY–35 into Peekskill.

Once in Peekskill, we ate at Birdsdall House, a very nice gastropub with ample outdoor seating. I was tempted by the fried chicken plate, but at $25, I passed. The menu and prices reminded me of Alobar in Long Island City, a place with solid food that is priced about 50% more expensive than it should be. Instead of the $25 fried chicken, I opted for the $14 pulled pork nachos. It was delicious option and was made with pork that was either organic or sourced from a neighbor’s yard. Either way, these were clearly not your ordinary nachos. Despite the inflated prices, I would definitely go back since the staff was nice enough to unlock their gate and allowed us to park our bikes in their huge outdoor patio. Also, their cocktails and desserts looks really good.

Peekskill brings to mind a few things. One is that it was the setting for the 1980s sitcom The Facts of Life, even if it was filmed in California. Another is the infamous 1949 Peekskill Riots. But one thing that may not come to mind is the Guatemalan presence in the town. I first noticed it last summer when I passed through Peekskill on my heat stroke ride to Cold Spring. I noticed a Guatemalan bakery on Washington Street, and then I saw a few people driving around town that looked like me. On Sunday, I noticed another panederia on Park Street. I wasn’t sure if it was Guatemalan until I saw their truck parked outside: I spotted a quetzal, the Guatemalan national bird, painted on the side of the truck. Clearly, my people were here.

At the end of the day, after stopping at a couple of other places, we headed down to the Brewery to await the 9:35 train back to New York. Although Sarah hasn’t really been on the road much this season, she did very well on this ride. She was only a few seconds behind me the entire day, and she climbed the hills like a champ. I know her father would be proud of her.