Years ago, I quipped that the three most festive “days” of the year were as follows:

Sure, these are “drinking days,” but more importantly, these are days when you’re feeling a sense of relief from having few obligations. On Your Birthday, your friends and family regale you with gifts and sometimes pay for your meals and drinks the entire day. What’s not to like? Your Last Night in Town is always fun because you’ve presumably done all you came to do and are now packed and ready to unwind before hitting the road the next day. “Tomorrow it’s back to reality.”Finally, aside from some last-minute grocery shopping, the Wednesday Before Thanksgiving is usually met with relief after traveling home (or because you didn’t travel at all) and are ready to unwind. “Make mine a double.”

But apparently, the Kids Today have turned this moment of relief into some awful binge-drinking ritual on part with New Year’s Eve and St. Patty’s Day.

a training ground for the kind of single-A-level bozos who think it fun to cram into all the joints in town everybody already hates, turning them into college-bar pop-ups for the night. Bad music! Pitcher deals! Sexual deviance! If the pilgrims could see them now…

In all fairness, this diatribe isn’t referring to my conception of the Wednesday Before Thanksgiving. This is for college kids going home during the Thanksgiving break and hitting up the bars they were too young to visit when they lived at home. I did that once with some high school friends during my junior year of college, but I never reprised the ritual. The Britisher was kind of depressing and after three years away, I didn’t have as much in common with those friends as I did before.

But in the public imagination, the kids have ruined Thanksgiving Eve. And now, consequently, I feel like an old-timer, complaining that the kids are doing it wrong. Because they are!

Over the course of seven Thanksgivings together, Sarah and I would go to as many as three Thanksgiving Day dinners in a single day. We would eventually pare that down to one because the travel would be a bit draining, but even then, there was still a lot of food to eat. It was early in that period that I started to ride about fifty miles or so on Thanksgiving morning. A turkey trot, even one on two wheels, is one of the best ideas ever! I did one last year, and despite the temperature being well below freezing, we all pushed on and burned a couple of thousand calories in anticipation of all the food we would be eating.

This year, I volunteered to co-lead a ride to Piermont on Thanksgiving morning (membership required to view listing) because the usual leader is out of town. But this Thanksgiving eve, we had a Nor’easter pass through the region that threatened to blanket the area with freezing rain and snow, making the prospects of riding to Piermont seem grim.

Despite all the hoopla over the storm, the snow didn’t actually materialize. But my co-leader and I were concerned that the rain and freezing temperatures throughout Thursday would create icy conditions between the city and Piermont.

We were not interested in riding in such nonsense. As I said to him, I’d rather be called a chicken (for being scared of possibly non-existent icy roads) than a turkey (for slipping and sliding all the way to Piermont and back).

We postponed the ride to Friday. 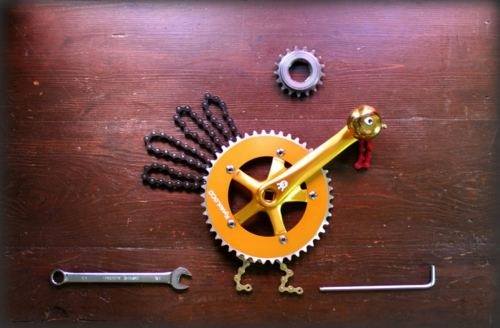 Yesterday was Thanksgiving Day, and it was another year that I didn’t see any family. Since everyone reminds you to be thankful for what you have, I professed my gratitude for this year’s bountiful harvest our global, just-in-time food supply system that made possible a huge Thanksgiving feast and days of leftovers.

Last night’s feast was actually my third Thanksgiving dinner of the month. A few friends in Long Island City hosted a dinner for friends two weeks ago. We continued our tradition of observing the annual Fake Thanksgiving dinner in Kentucky. And, of course, there was last night’s huge feast. All those dinners lead to a lot of surplus calories!

Thankfully, the skies were clear and the roads were dry enough for a bike ride to Piermont to make room for this third Thanksgiving dinner. Early in the week, our region hosted a big storm that wreaked havoc out west. By Thursday, however, the storm had passed and left us with a cold and windy but sunny day.

In New York City cycling terms, riding to Piermont on Route 9W is almost as routine as riding in circles around Central Park. It’s a fine ride the first twenty times you do it, but it gets boring after that. However, it’s a great ride to do on Thanksgiving morning. You’ll get about fifty miles of riding, which for me burns about 2,500 calories. You get done in about four to five hours, leaving plenty of time for a snack and a shower before indulging and passing out for the day. And the best argument for riding to Piermont is that the Community Market is open on Thanksgiving Day.

Our group of nine riders braved the cold and some isolated patches of ice in the name of caloric balance. When we started in the morning, it was a brisk 30°. The 14 mph wind made is seem like it was 20°, but if that’s if you’re standing still. Because we faced that wind for our entire ride to Piermont, it was like adding another 15–18 mph to that headwind. I don’t even want to think about what the “wind chill” was. 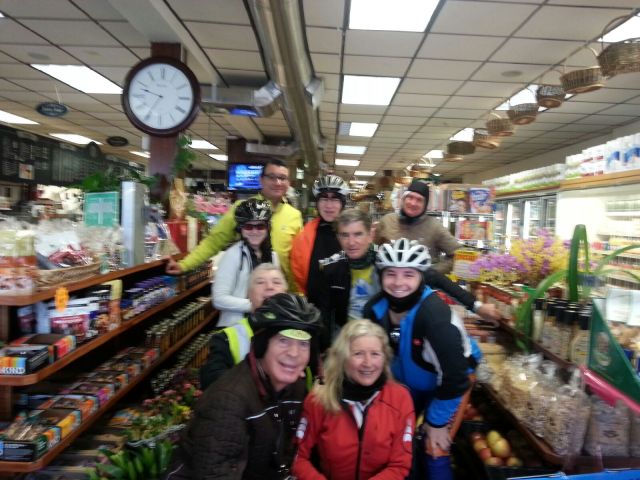 Our riding group at the Piermont Community Market. The photo is blurry probably because the photographer was shivering.

The challenge to riding in cold weather is remembering to drink. When it’s that cold and your water bottles are close to freezing, the last thing you want to do is take a sip. But you have to keep hydrated, otherwise, you’ll cramp up and die. The same is true when it’s hot, but in that situation you’re faced with a different challenge: remembering to eat.

After gulping some room temperature water and devouring an egg and cheese sandwich at the market, we all began the trek back to the city. Gettting going was tough. My fingers were instantly numbed by the wind, and I began shivering. The magic of Thanksgiving however put a nice climb ahead of us, and with that, I was warmed up and stopped shivering. We also had a nice tail wind for most of the route, which was welcomed because it was not a bone-chilling head wind.

Another reason I rode yesterday was because I signed up for this silly Earn That Turkey Challenge put on by Ride with GPS and needed some miles. Even with the eighty-mile New Haven ride (77 miles) and yesterday’s Turkey ride (53 mile), I still need another 32.5 miles to finish 200 between November 11 and the end of the month.

It looks like I’ll be riding tomorrow to get that silly 200-mile badge.

This year marks the tenth Thanksgiving that I’ve spent on the east coast and without my family. I usually see them at Christmastime, anyway, so the high airfares, travel headaches, and a transcontinental roundtrip flight in a short number of days makes the trip not worth the hassle. Not only that but in the days when I used to take classes, I used to have too much work to go all the way to Southern California only to come back in a few days.

So to commemorate this auspicious milestone, I thought I’d try to remember what I did in lieu of being with my family over the decade. In certain years, I didn’t have much of a choice, but other years, I probably could have gone out west but chose not to. Let’s review….

In a misguided attempt at being self-sufficient and neighborly, I held an” orphans” Thanksgiving dinner at my apartment. Three people showed up, and I ended up with leftovers for over a week. Afterward, there was an East Village bar crawl with my friend Chad and some girl he was dating at the time.

My first year taking a comprehensive exam. The weeklong ritual for PhD students seemed like a pain in the ass, but it was actually a lot of fun. I never had such productive weeks in my graduate-student career, if thirty pages of writing in six days counts as extraordinary feat of productivity. I heard that the current crop of PhD students only have to do two of these, while we had three. When I heard this, I jokingly asked whether they got researchassistants, too. (They don’t, but seriously….)

This was my second year taking a comprehensive exam, and I was equally productive. During these two years, I spent most of the week at the now-closed alt.coffee shop on Avenue A. My dinners would consist of cheap pizza and sandwiches, and usually by Thursday evening, I would be in good enough shape to make the $3.00 Guinness pints at Mona’s on Ave B. I didn’t have turkey in either 2003 or 2004, and I was fine with that.

The first (and only annual) Peter Luger dinner with David, Peter, and Lisa. This was clearly a step up from pizza and sandwiches, and I didn’t spend it in total isolation. I could help but feel the satisfaction of eating steak while my colleagues were toiling away writing their comprehensive exams.

Justin and I tried to recreate the Peter Luger experience, but we couldn’t get David or the rest of the Sabatinos to join, so it was a dinner for two. We went to Alberto’s afterward, where a buck of European graduate students were having Thanksgiving. (It was cute.) I seem to remember that we watched The Ali G Show for most of the night. (It really was 2006!)

I’m putting these two together because they’re essentially the same, and they kind of blur together in my mind. The weekend before, I went with Sarah to Kentucky for the Weitlauf’s “Fake Thanksgiving” celebration, which is the most brilliant idea ever! On the day itself, we started the day by having a Thanksgiving dinner at the Bianculli’s home in Port Washington. After eating way too much, we then went to an evening dinner at Will and Jill‘s on the upper west side for a second Thanksgiving dinner. In 2008, I varied the routine a bit by going on a “Turkey Trot”-type bike ride before eating so much food.

Slept in on Thanksgiving morning and again went to Will and Jill‘s. Ate way too much Tofurkey, and it was my first Thanksgiving in three years where there was no turkey. Actually, only for about half of the decade did I have turkey on Thanksgiving. And I’m okay with that….